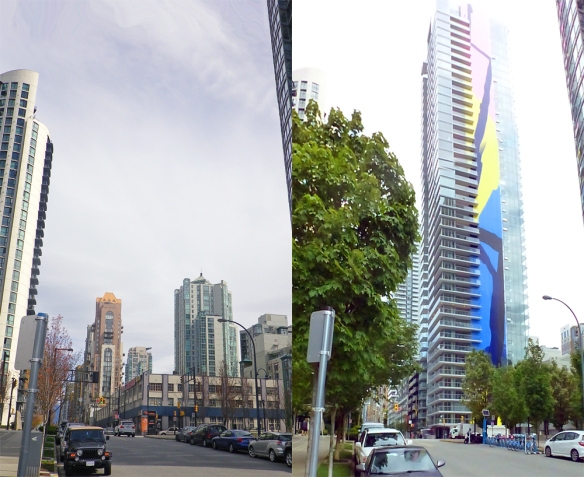 The Charleson is a 43 storey condo and rental tower designed by DIALOG for Onni, with a rental podium and condo tower. Completed in 2017, it replaced a mini-storage warehouse that had originally been built as a storage warehouse, probably for Johnston’s Storage – a moving company – in the mid 1920s. The artwork on the new tower is ‘Finger Paint’ – 416 feet high, and 30 feet wide, created by Vancouver artist Elizabeth McIntosh, 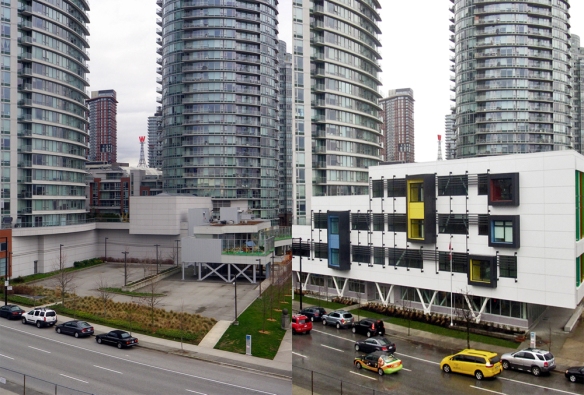 The school site in International Village was reserved decades ago – but Provincial funding for the building was only approved a couple of years ago. Now the three-storey steel framed building, with cantilevered upper floors to get the needed floorspace on the tight site, has been completed.

Designed by Francl Architecture, the building replaced a temporary parking lot that for several years couldn’t be used for parking because the childcare built to the north was built over the site access. For some years before the Firenze towers were built here (completed in 2007) there was the International Village lake. Construction of the underground parking commenced in the 1990s, but was then stalled for several years as the housing market took a break. The hole filled with water, and even attracted wildlife. In the further past this was freight yards and warehouses – in 1912 the site where the school has been constructed was shown as ‘hay storage’.

980 Howe is a new office building developed by Manulife, designed by CEI Architecture with Endall Elliot. It replaces a single storey Royal Bank building and surface parking. The bank was developed in 1968.

When our first ‘before’ picture was taken, in 2002, the Remand Centre round the corner from the Main Street courthouse was just closing. Designed by Richard Henriquez in the late 1970s and completed in 1983, the building was taken out of commission as it became unnecessary to hold enough prisoners on remand to warrant the cost of running the building.

In 2008 the bottom floors were converted to the Community Court, but the upper floors and their massive concrete pods remained unused. A $21m makeover later, designed by Henriquez Partners, the building is now a 96 unit low cost and non-market housing project managed for B C Housing by the Bloom Group.

Here’s one of the thirteen non-market housing projects funded by BC Housing on land provided by the City of Vancouver. It’s big – 147 rooms – and managed by the Raincity Housing and Support Society. It’s named after Lorna Budzey who died in 2000, a resident of Raincity’s first shelter. The building is designed by Neale Staniszkis Doll Adams Architects and is 10 storeys high.

The site was previously the home of the Drake Hotel, a small (24 room) hotel dating back to 1912, and bought by the City of Vancouver in 2007 at the same time the Province started buying SRO Hotels. The City carried out a basic renovation of the property to allow it to be used as temporary rooms for tenants whose building was being given a more significant upgrade that meant they had to move out for a while. The hotel’s neon sign, dating back to 1950, is in the Museum of Vancouver’s neon collection. 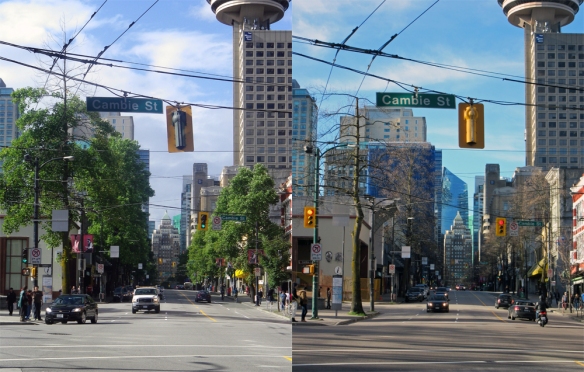 The MNP Tower (the accountancy tenant who were first to sign up were given the naming rights by the developer, Oxford Properties) was squeezed into a small site between the iconic Marine Building and the Guinness Tower (both also co-owned by Oxford). Initial designs were by Vancouver-based MCP, but after rejection by the Urban Design Panel a new architect, US based Kohn Pederson Fox were brought on board and they generated the gently curving dark blue-grey tower that has just been completed. 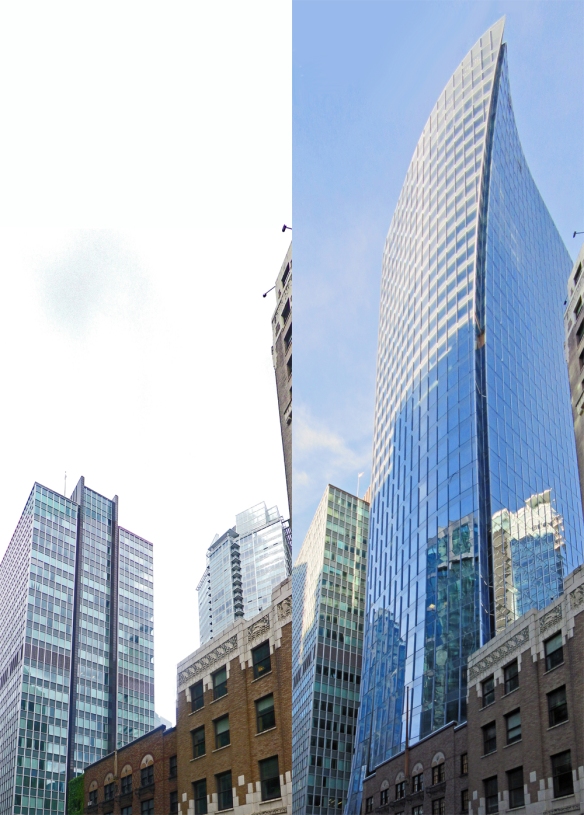 The base of the building incorporates the façade of the University Club, abandoned for many years (except for movie shoots), which was designed by Thompson, Berwick & Pratt in 1929 when it was known as the Quadra Club. 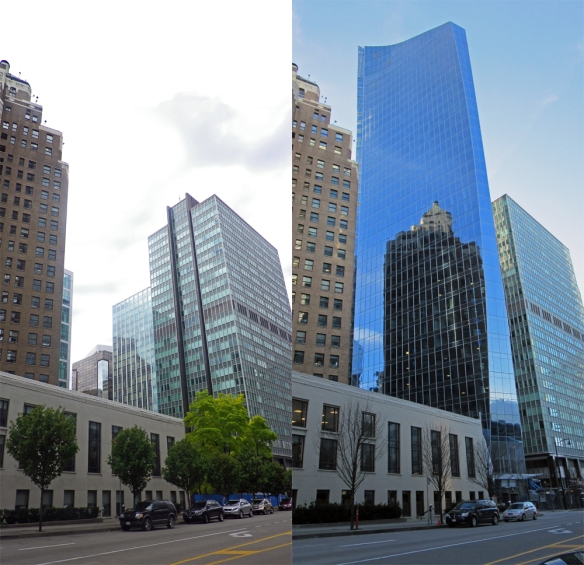 Not all the new non-market housing is being built Downtown. Here’s an 8-storey newly built 103 unit building on East Broadway. Designed by Neale Staniskis Doll Adams it incorporates the Broadway Youth Resource Centre that had been located here previously. Initial plans for the BC Housing funded construction (on a site provided by the City of Vancouver) had 11 storeys, but this was reduced to better fit with the surrounding scale of development. 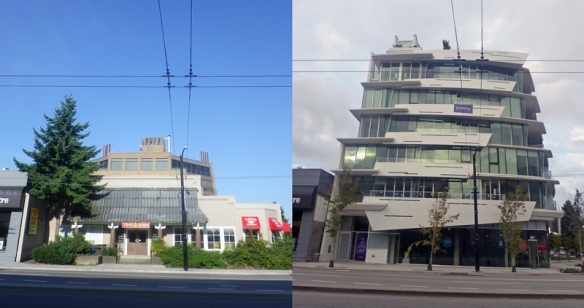 This small corner site on Cambie Street (where the Cambie Bridge starts) used to hold a small ‘Chinese’ building built in 1987. It was last occuopied by a sushi restaurant, but before that it featured Korean cruisine. 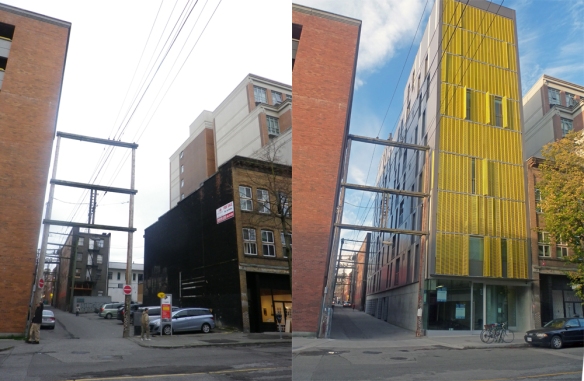 The Flats is an innovative condo building on nine storeys on a 25 foot wide lot. It features concertina shutters on the façade that filter the light and allow residents to have greater privacy, and they add a dramatic yellow splash into an otherwise brick coloured street. 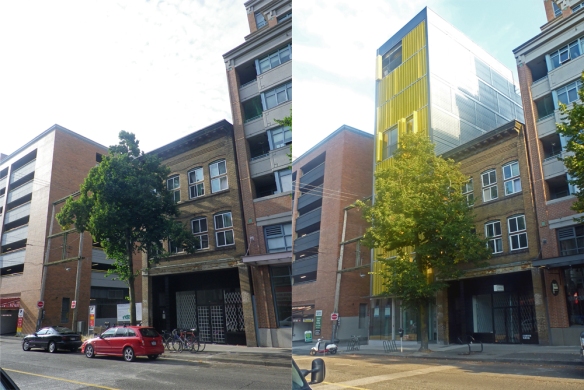 Designed by Birmingham and Wood (with UBC’s Inge Roecker) the site the building sits on had been vacant for at least a decade. The first building on the site was the house built by D J McPhalen back when East Georgia was still called Harris Street.

As the name might suggest, there are 45 condo units in this 6-storey project in Mount Pleasant. Designed by GBL Architects, it includes a floor of commercial use that the architects have moved into themselves. It’s a simple colour palate of black and white; an alternative to the more colourful buildings that the same architects have been designing in the past few years.

It replaces a 2-storey office building from the early 1970s – one of the few spots where the zoning permits higher density residential development at the expense of a modest amount of commercial space.